yes, yes, I know. I know I said I would never put a festival on again, think I’ve said this every year since 2002 but here we are – again. I love it really. 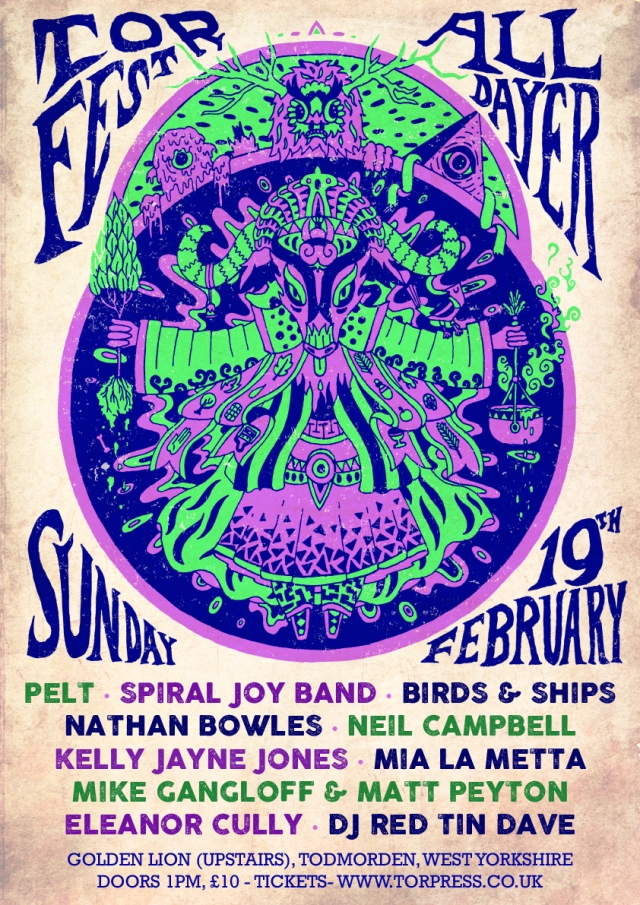 Ever since Jake and I moved to Todmorden and started arranging shows here we always said that the number one band that we wanted to put on, at the top of every wish list, was Pelt. Honestly never thought it would happen but I guess if you dream enough… blub blub, might cry.

So yes! On the 19th February this year the mighty PELT are coming to TODMORDEN (?) and it’s their only gig in the UK outside of London. It’s pretty unbelievable but we are very lucky so I hope everyone reading this will make the effort to come and see this one off show of a lifetime here in our small Yorkshire town. It’s a Sunday but don’t worry, we’ve arranged it so everything will be over by 10pm so folks can get off home on the last trains.

In addition to Pelt we have the lads from the band performing in 3 other acts during the day plus a whole heap of local talent so it’ll be a great event. It’s £10 for the day with all proceeds, as always, going straight to the artists performing. Cheers to The Golden Lion for being so supportive of us, we love you.

Tickets available here – it’s quite a limited capacity so get a ticket soon as, even if you’re my friend it won’t guarantee entrance, soz.

PELT– Acoustic drone legends, incorporating elements of folk, traditional and old time music. Only UK show outside London, not to be missed!

NATHAN BOWLES– A member of Pelt and The Black Twig Pickers as well as a regular member of Steve Gunn’s band, Bowles has been carving out a name for himself as a solo artist fusing old-time appalachian banjo picking with avant-garde composition.

MIKE GANGLOFF & MATT PEYTON– Gangloff is the founder of both Pelt and The Black Twig Pickers. A new duo taking traditional old-time music in a new direction.

KELLY JAYNE JONES – Manchester based sound artist specialising in electro-acoustic works. Jones’ solo music combines live flute with subtle feedback with astonishing results. She is best known for being half of Part Wild Horses Mane On Both Sides.

Right, now I never normally point this out (online I mean, I tell everyone I know in real life) but I think it’s really important in these times to be even more vocal so here we are. I’ve got 11 people playing, 6 are men, 5 are women, that’s a pretty good balance and it didn’t happen by accident. I actually thought to myself, huh, women are really unrepresented in the music scene so let’s give a platform to them and show the world how easy it is to include a bit of THOUGHTFUL PROGRAMMING. I do this at every single show I organise, it’s easy. Women are out there, you just have to think about it and present opportunities. I urge anyone putting on gigs to do the same and if you need advice about it please ask me – sofiesea@gmail.com